I was born in San Fernando, CA in 1961, and I grew up in a loving family that went to church, but I don’t remember my parents talking about the Lord at home. At age 6, we moved to Bakersfield, CA (Nashville West), and we attended a little Baptist church half a block from my house.

After graduating high school, I went to California State University, Bakersfield for my freshman year, and then I decided to work for a semester in the oil fields to make some money. That semester turned into two semesters, and before you knew it, school was the last thing on my mind.

After working a few years in the “patch”, as we called it, and receiving several injuries, including being electrocuted, I decided to find a less dangerous line of work, so in 1987 I applied for and became a Kern County Deputy Sheriff.

Up to this point in my life I attended church regularly and did all the things a “good church goer” was supposed to do. However, in 1990 I was injured in the line of duty and medically retired in 1991. I quickly lost my sense of “identity” with my career and fellow deputies, and I pretty much began to do everything a “church goer” was not supposed to do. Eventually, I surrendered to the Lord and began a real relationship with Him, instead of a system of dos and don’ts. I went back to university, graduated in 1993, and became a 6th-grade teacher. In 2000, I became a teacher in the prison system and was a volunteer chaplain for 17 years.

I married the love of my wife, Leah, in 1998. We are a blended family with four boys: Joshua, Eric, Ryan, and Jacob. We served together in various ministries in Bakersfield until we felt the Lord calling us to move out of California.

We moved to Tennessee in 2016 to retire, go fishing and hunting, and traveling; however, the Lord had other plans. Within a year of serving here at CCColumbia, Pastor Tim asked me to be an elder. Two years later, he and the other elders ordained me as a pastor. It is amazing to see how the Lord was able to restore me from the mess I made of my life and allow me the honor to serving Him and His people.My life verse is Micah 6:8 “He has shown you, O man, what is good; And what does the LORD require of you, but to do justly, to love mercy, and to walk humbly with your God? 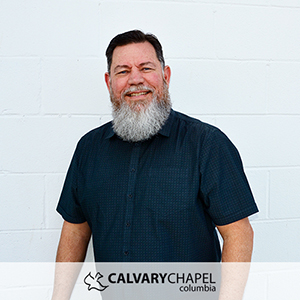