I was born April 30th, 1972, in Billings, Montana and grew up in what I call a very spiritually confused home. We never really went to church much, but when we did it was not a pleasant experience. I did believe in God growing up but never had a chance to really know Him.

I married Sonja Kay Flipse on February 3rd,1996 and came to know Jesus in the midnight hours of December 1997 through a bizarre bout with anxiety due to a fear of death. Jesus came into my life and transformed me, and I have never been the same. My life verse is Philippians 1:21 “For to me to live is Christ, and to die is gain.”

Sonja and I moved from Billings, Montana to Ft. Lauderdale, Florida in August 1999. Our firstborn son, Crue, was born shortly after our arrival. Three months later, we moved to Sarasota, Florida to start a business in the dietary supplement industry. We had three additional children while living in Sarasota: Silas, Zoie, and Jude.

In 2007, God would call us to Tennessee by way of moving our business to Spring Hill. During this time, I received a call to the pastorate, and God laid it on our hearts to plant Calvary Chapel in Columbia. God has been faithful through the years to grow me as a man of God and this church into what it is today. He gets all the glory because it is all His doing. Sonja and I are grateful to be a part of it. Blessings to you, saint, and keep looking up because Jesus is coming soon! 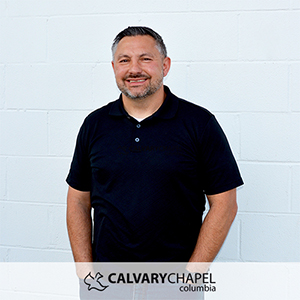